A hard-charging Harry Bates aggressively clawed back time in yesterday’s second heat of the National Capital Rally after casting aside mechanical issues that dogged him late on Saturday.

They finished their home rally in fourth position and, at the half-way point of the Australian Rally Championship season, are just 34 points off the series leader in third place.

On Saturday, the Toyota pair pushed hard and won three of the first seven stages, leaving them handily positioned in second, just 17.8 seconds behind the leader.

But a blown turbo cost them substantial time on the final two stages of the day, which saw them slip to sixth before the turbo could be replaced.

Earlier, Harry’s brother Lewis and four-time ARC champion Coral Taylor retired due to engine damage from a broke oil line on their Toyota Corolla S2000 after an awkward landing over a jump.

Harry Bates said he remains optimistic about victory in this year’s championship despite disappointment at missing out on back-to-back wins in Canberra.

“We clearly have the pace to challenge for this year’s championship against quality competition – and hopefully we have put our tough luck behind us,” he said.

“It’s amazing that Neal Bates Motorsport, a small Canberra-based team, has put together such a quick car that is taking it up to the international R5 rally cars.”

The Yaris AP4 recorded its first victory in the opening round of the 2018 season in Victoria and took Bates to a spirited second-place fightback during the second round in Western Australia.

The rally championship continues in Tasmania late next month with the fourth of season’s six rounds. 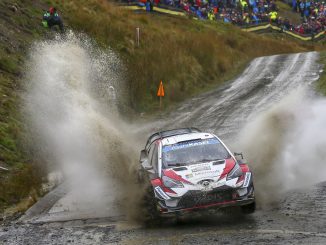